"It's a dangerous business, Frodo, going out your door." - EDINBURGH TO GLASGOW

“It's a dangerous business, Frodo, going out your door. You step onto the road, and if you don't keep your feet, there's no knowing where you might be swept off to.” - Bilbo Baggins now, two weeks later, it's so easy to say "good experience" or "exhausting but worth it". or "I saw a lot". No aching feet anymore, no 30km which still have to be done, no 17kg on my shoulders for hours. I'm amazed by how fast we can forget both positive and negative emotions and thoughts connected to certain experiences - despite being so strong and present in that particular moment they fade away so quickly, leaving only memories of selected actions and impressions behind. the conscioulsy accessable part of my brain remembers "I went there, it looked like this, we had fun, it was beautiful, what a disgusting smell, I felt pain, joy, reliev, whatever"; not only related to this trip, but in general. much harder is to bring back and re-feel the strong emotions, the incredibly quick thoughts dashing through my mind as I can only access the conscious memory. however, it's not effort, not the seventeenth attempt, not concentration which then finally brings them back, it's the wind on a perfect autumn day, this specific song which seems to stop the world, that snapshot which shows us rocking with laughter or that movie scene in which my favourite quote is whispered by that deep, rough voice. with me these are the seconds that cause flashbacks.
anyway, the point I'm trying to make is that it is very hard for me to bring that great trail back.

The Forth and Clyde & Union Canals 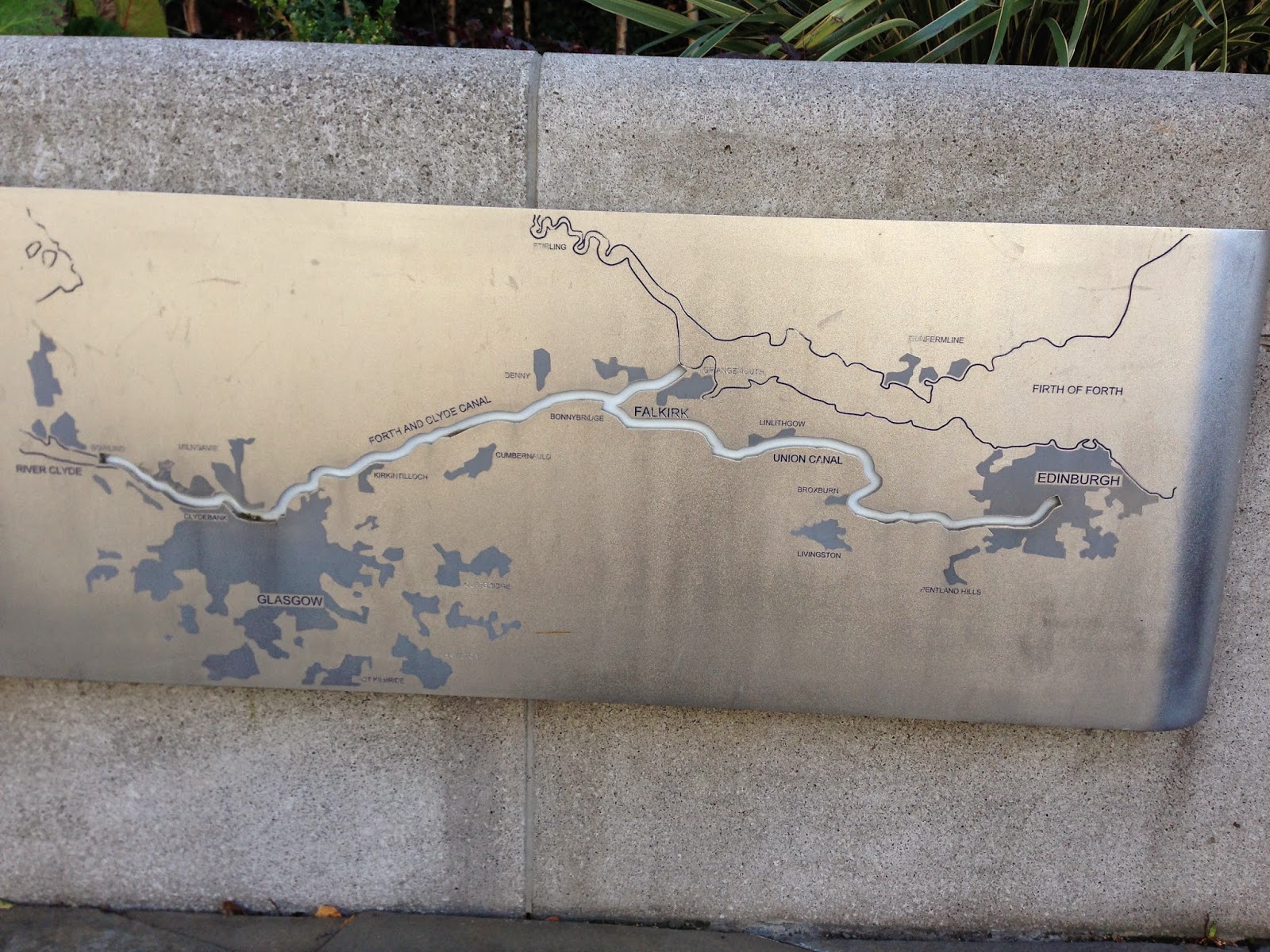 about two months ago I came up with the idea I could do one of scotland's so called great trails, which are "[...] nationally promoted trails for people-powered journeys. [...] With each trail being at least 25 miles in length, all are suitable for multi-day journeys as well as day trips." (http://www.scotlandsgreattrails.org.uk/)
I can't remember why, I guess it's just a logical result of all the things I've been doing so far, my climbing, the hiking which from the very beginning has been especially promoted by my dad, the skiing which has become more again over the last few years, and in general my love of nature, mountains and countryside. what's more, my former guitar teacher once said "...the slower you travel, the more you see...", a sentence I've  been thinking about a lot. there's truth in it - if you think of a journey by plane which perhaps offers you a nice view of some clouds and the country from above and then compare it to a train journey, there's a difference in what you get out of it. if one goes one step further, a mountain biking tour for instance, even more will be discovered and percieved. logically, the "ultimate experience" must be when you walk from A to B instead of using some kind of transport.
when a few of my housemates and me decided to visit edinburgh in late september I thought I could combine the city trip with my first great trail. so I started planning more detailed: route, equipment, time, places to stay for the night, etc.

after hours of research (mainly looking for the right equipment) I was ready, here the facts of my journey
-about 100km from edinburgh to glasgow by foot
-route along two canals: first the union canal from edinburgh to falkirk, from where I would walk along the forth and clyde canal to glasgow
-I planned to do about 30-35km per day which meant that it would take me about 3 days (with an average speed of 5-6km/h and about 6 hours of walking per day)
-therefore, I would spend two nights in the tent somewhere on the way
-my backpack should be around 12kg (in fact it then was about 16-17kg)
-after completing the trail I would stay one night in glasgow, spend the following day there and then go home in the evening by bus

generally speaking, the circumstances were perfect. I had three days with perfect weather conditions, not cold, not too warm, no rain at all, sometimes a bit cloudy but mostly sunny. the route was easy (as expected) since it was all the time along the canals (however, I left the union canal between broxburn and linlithgow in order to see something else than only the path next to the canals). I found two brilliant places for camping. my equipment was ideal (my backpack could have been a bit lighter and I forgot my cuttlery though).
the only three things which occasionally made the whole thing challenging were feet (or shoes), shoulders (or backpack's weight) and mind - so it's basically about physical and mental strenght (or weakness :D). 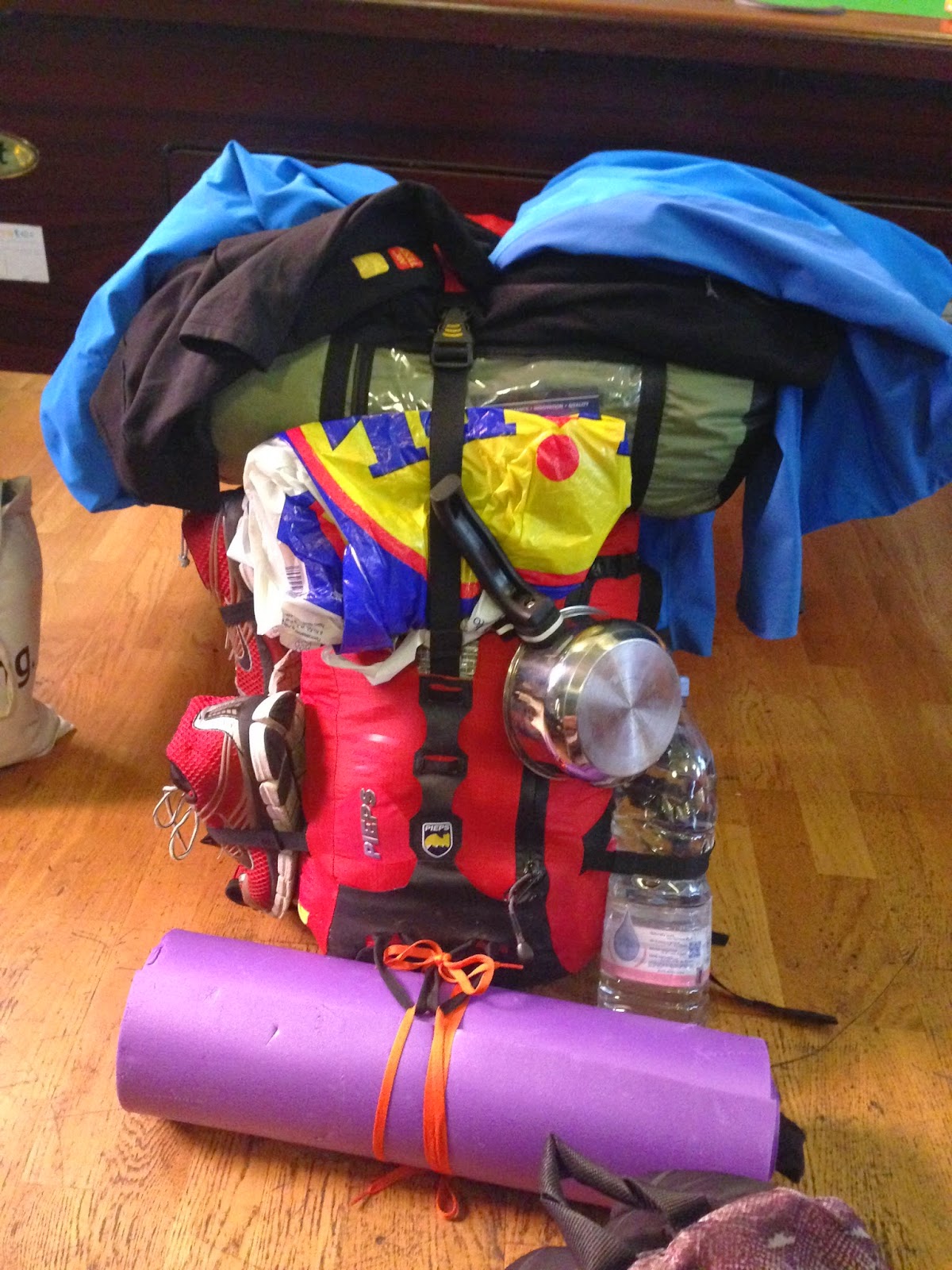 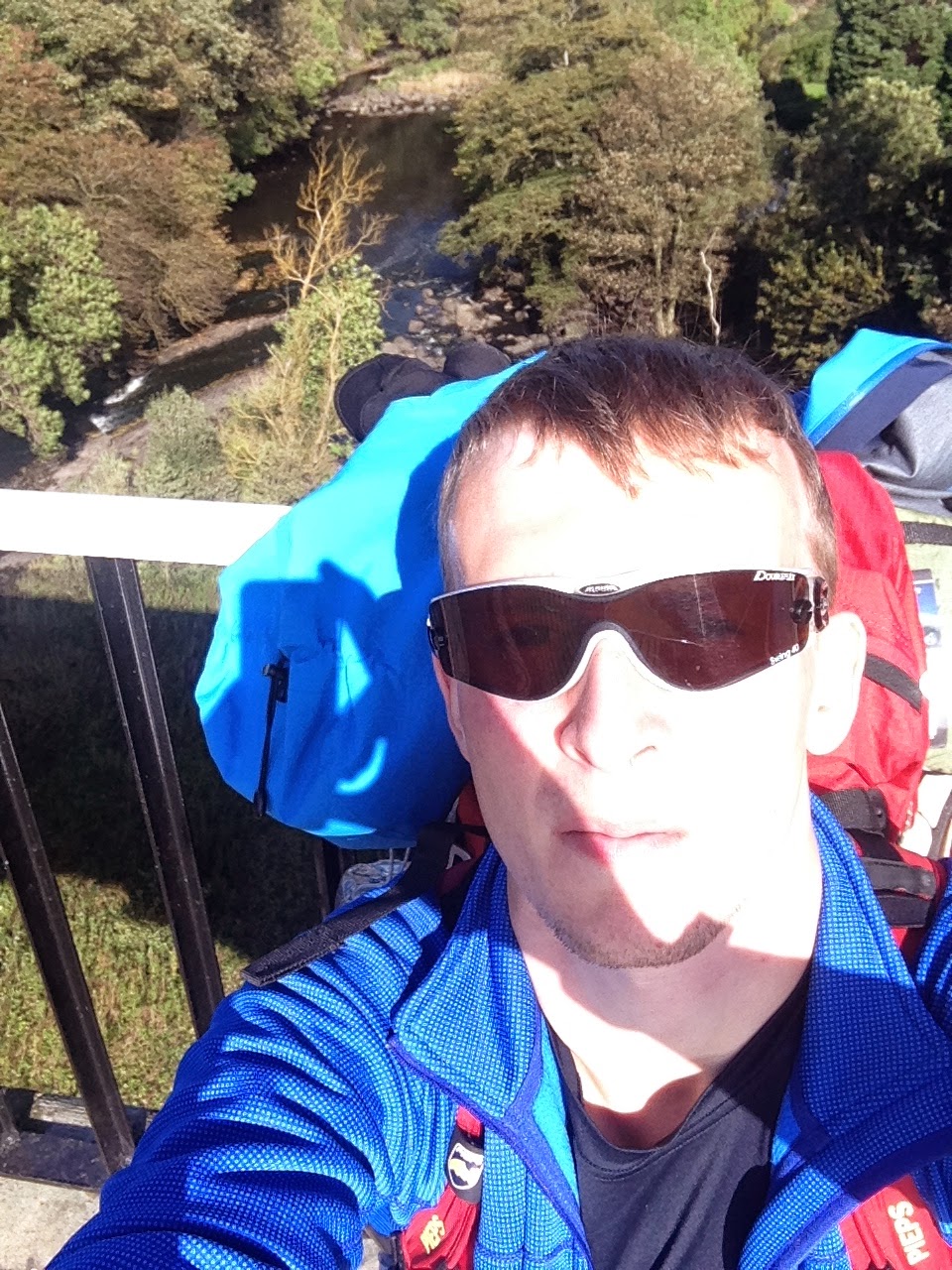 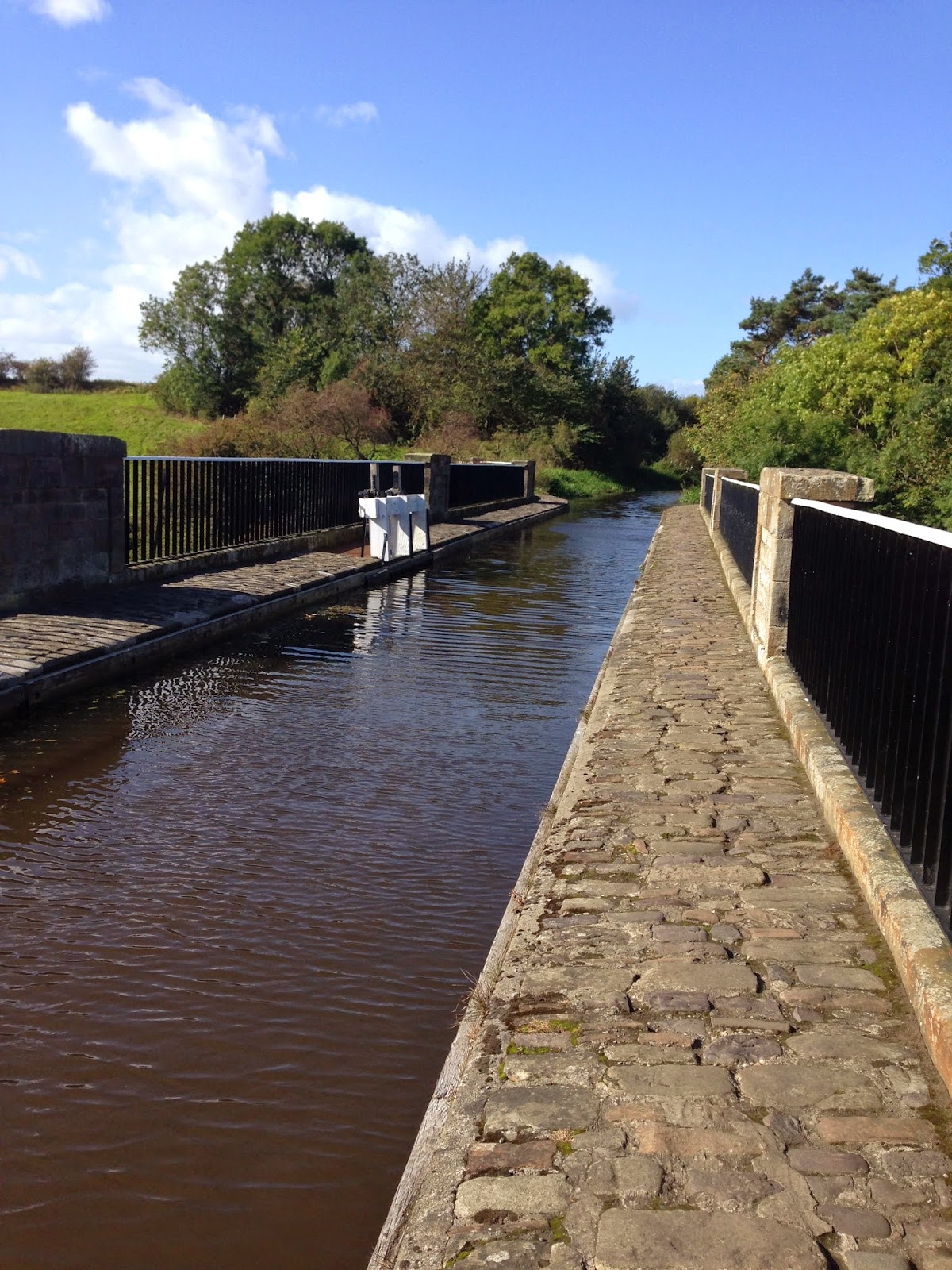 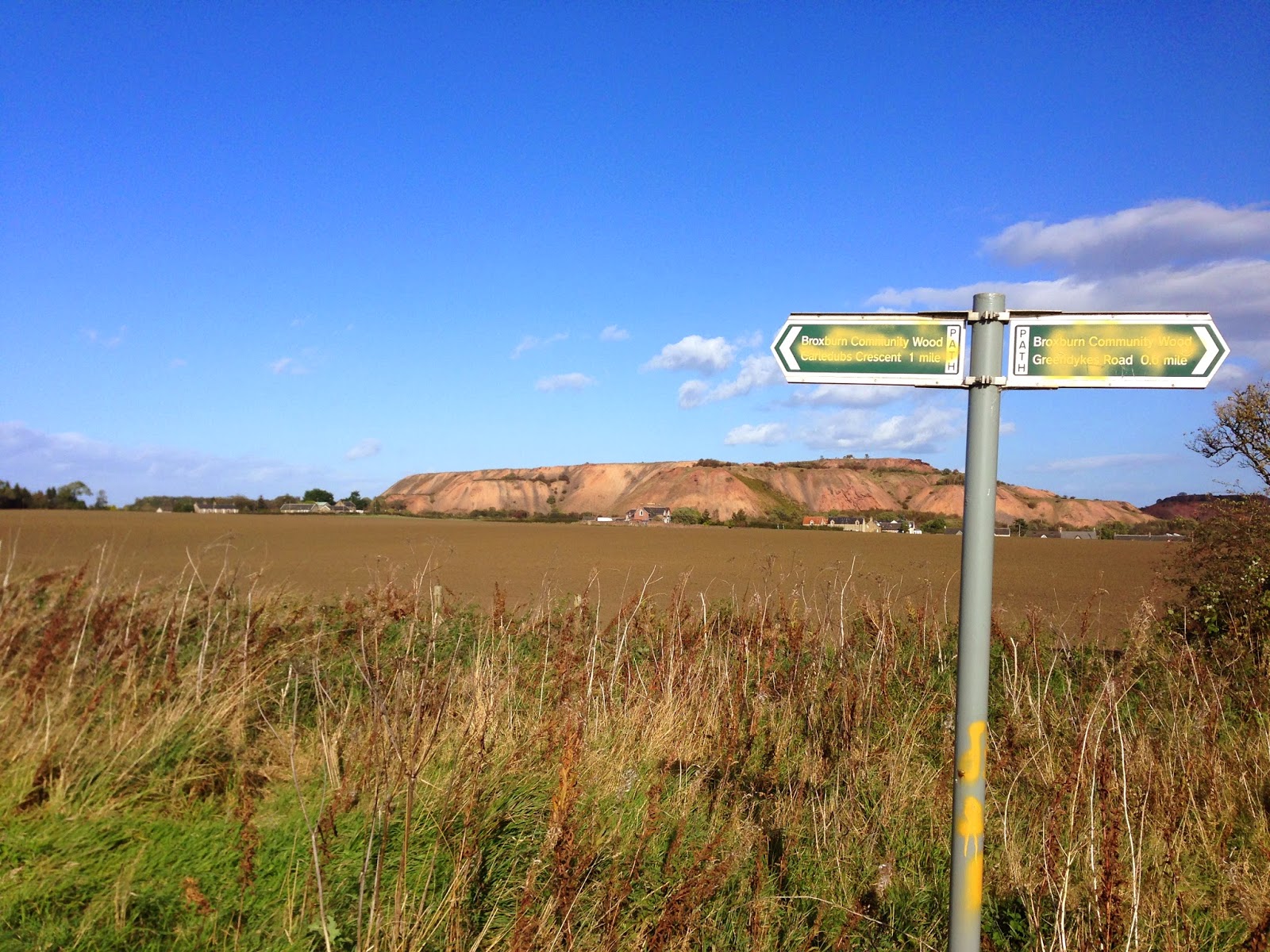 throughout the first day, everything went pretty well. of course, I had to make a break after every hour, mainly because of my shoulders but my pace was good and made a good progress. in the afternoon it started to get more difficult, I was getting tired and the place I wanted to reach on this day seemed still so far away. moreover I was walking through difficult terrain, which slowed me down a lot and at the same time was quite exhausting. it sounds stuipid but the closer it got to dawn the more difficult it became for me. I was tired, felt kind of lonely and unsecure (which now seems stupid), was a bit concerned since I had never done wild camping before, stuff like that. nevertheless, after a terribly long afternoon I finally found a perfect spot in a forest near to beecraigs country park where I could pitch my tent. I slept for more than 11 hours.
the second and the third day were much better in terms of being used to the weight, though there were periods of time where I'd have loved to just leave the backpack behind. 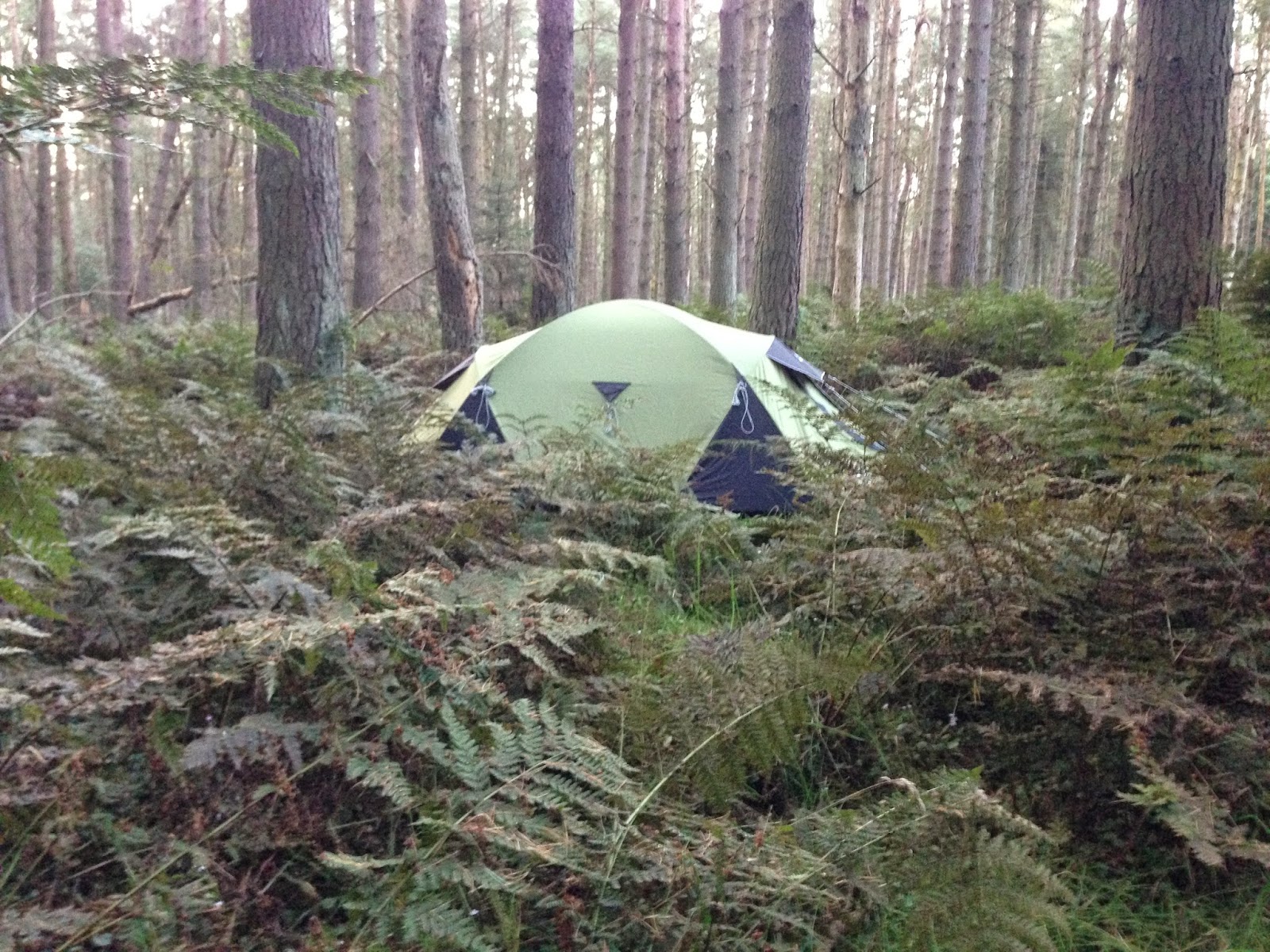 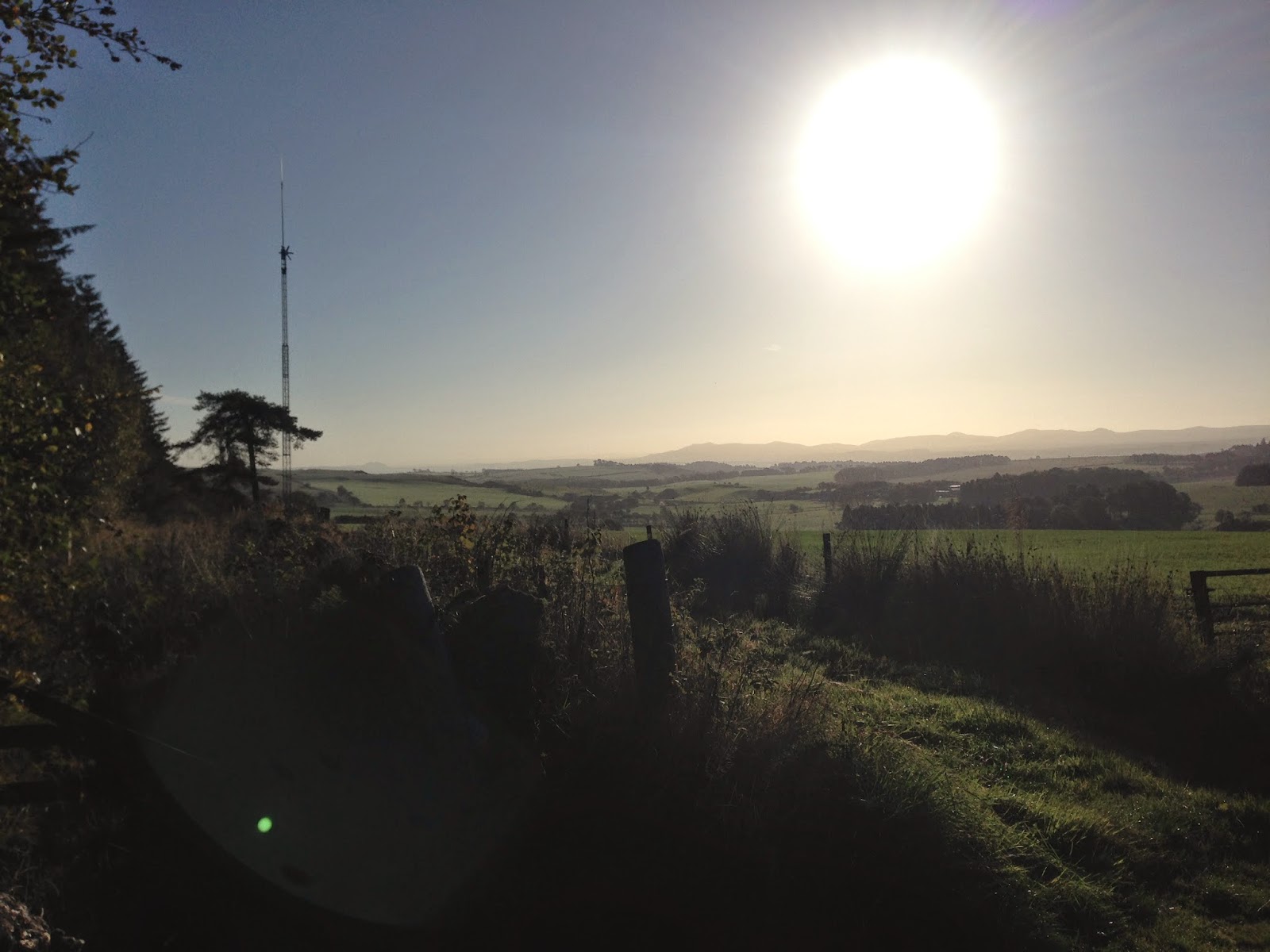 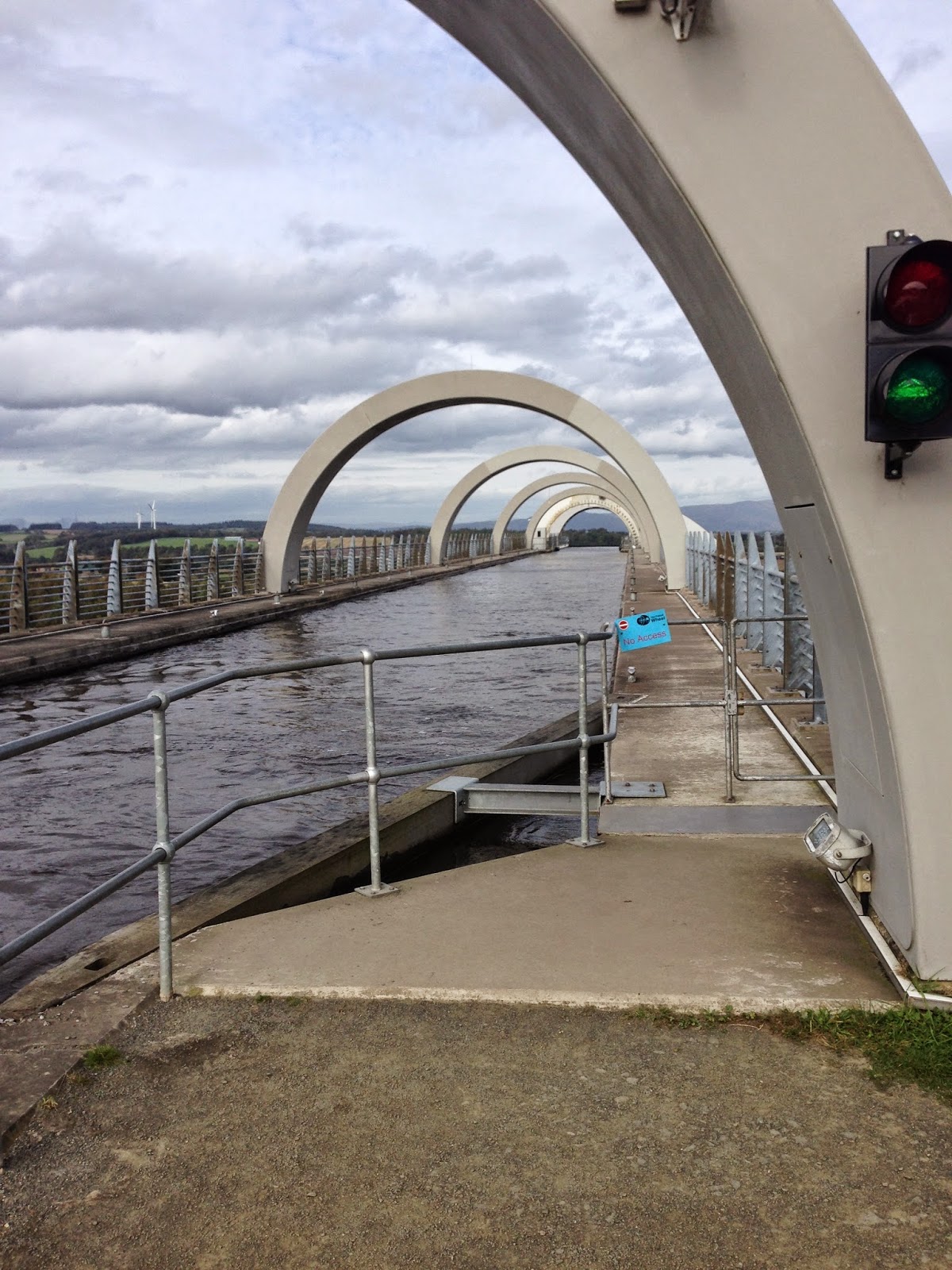 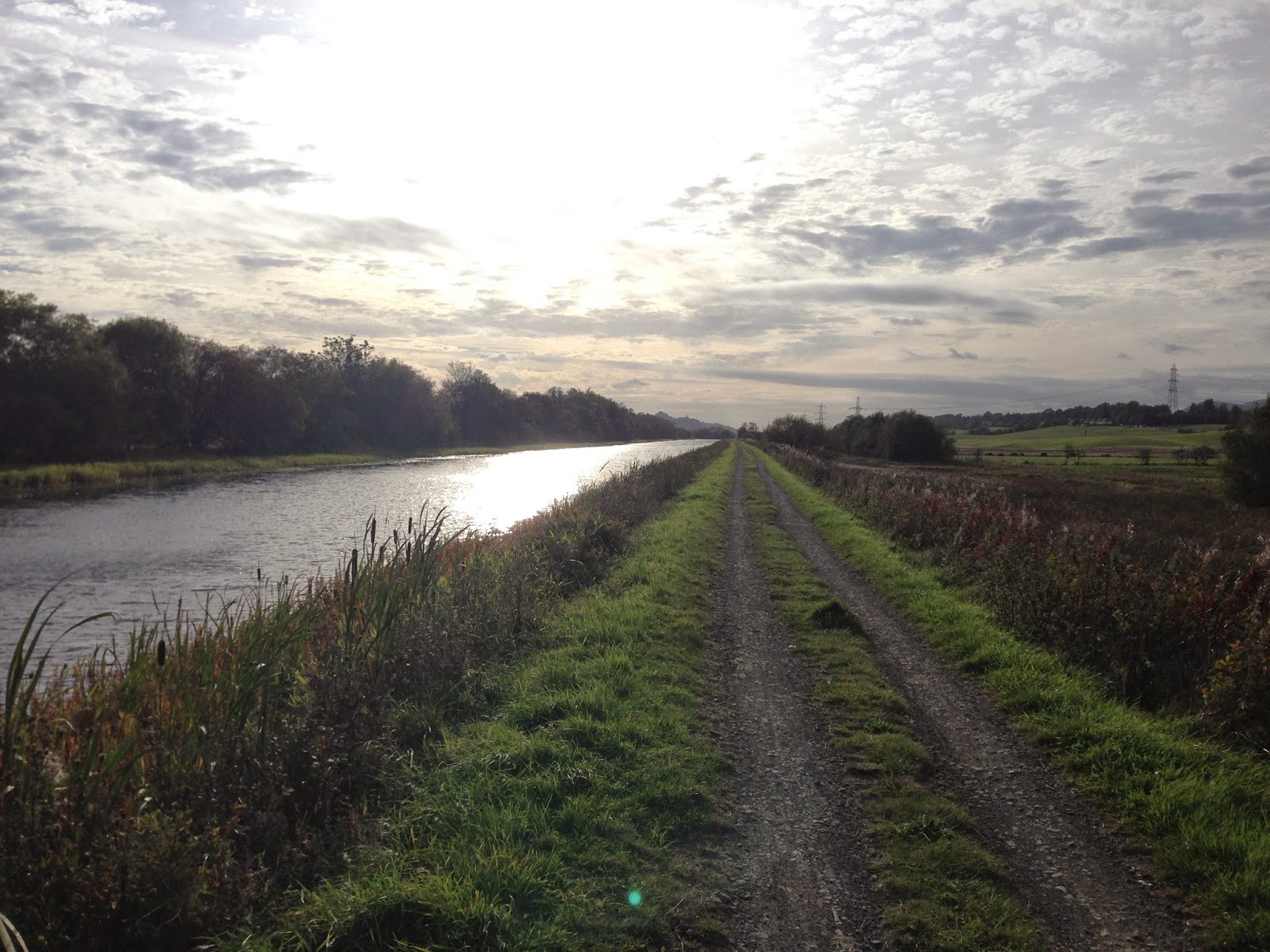 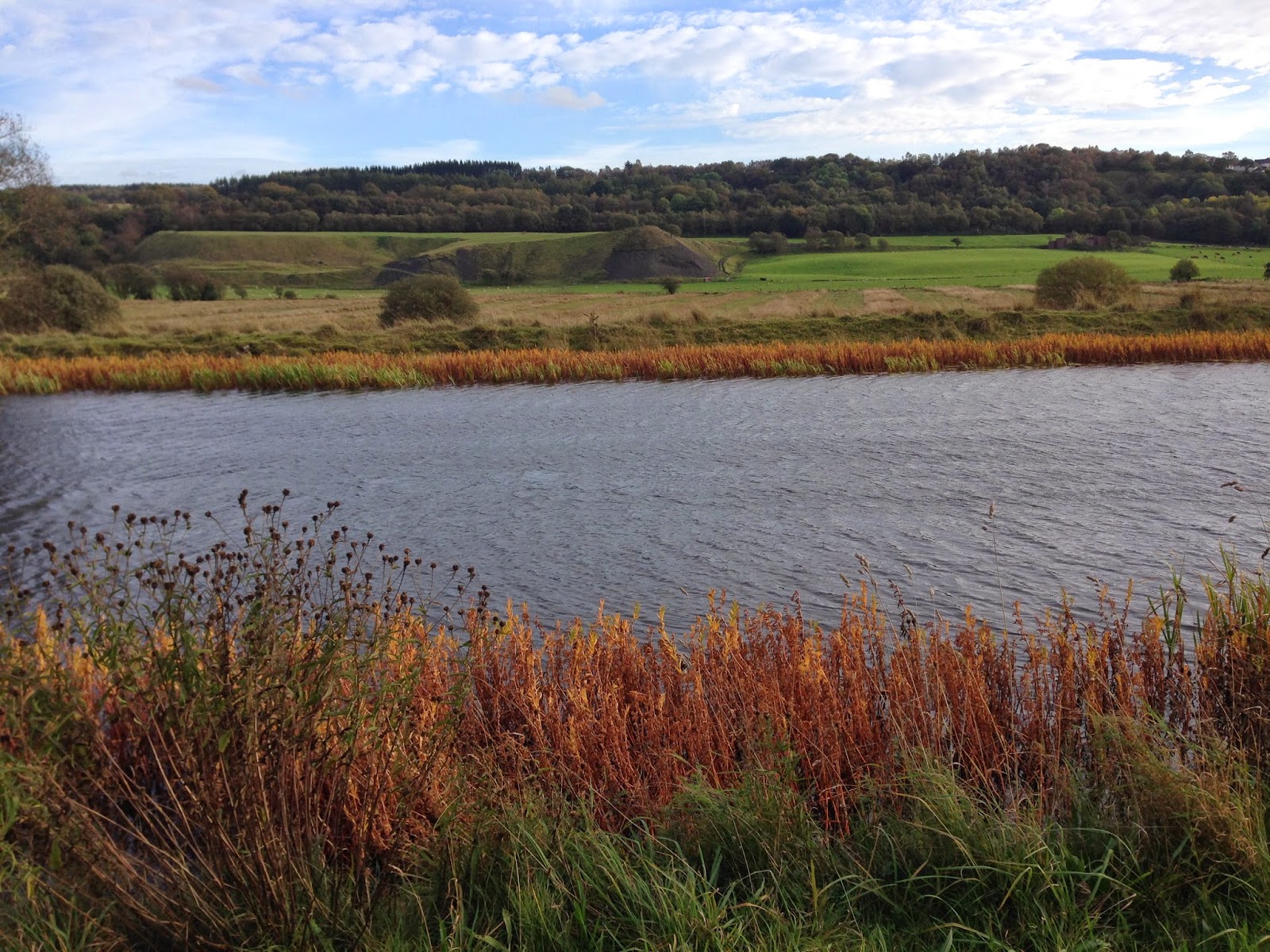 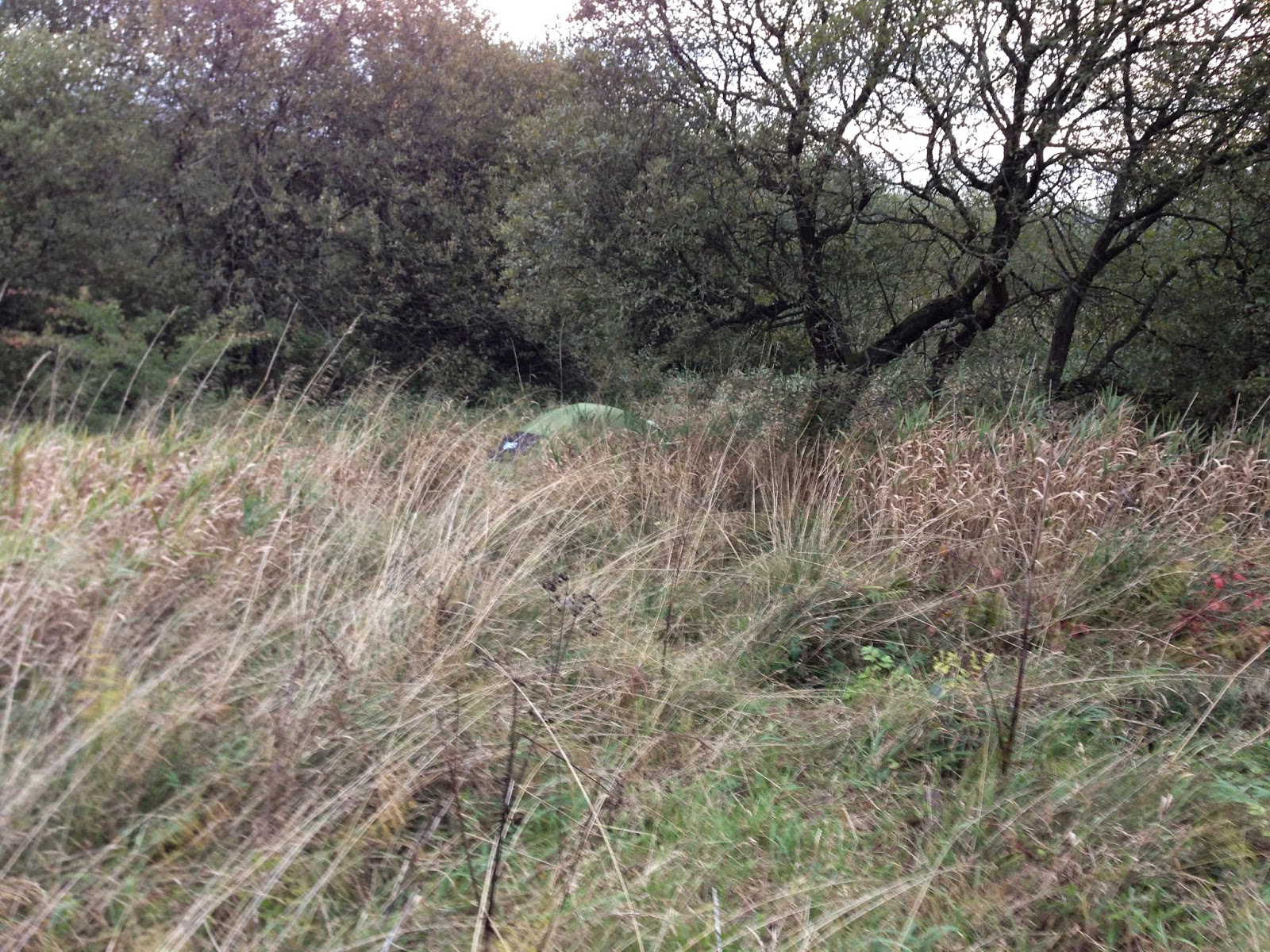 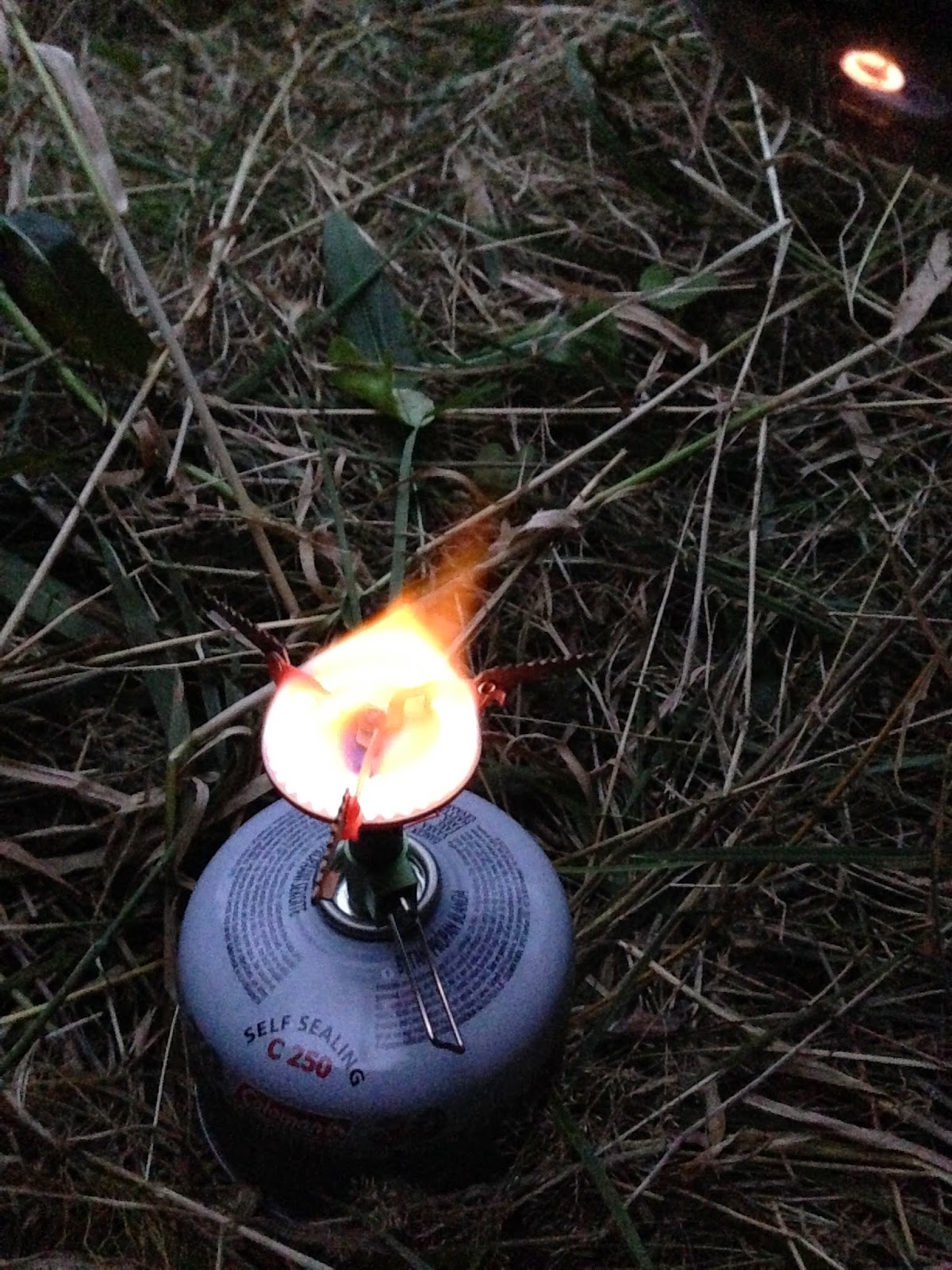 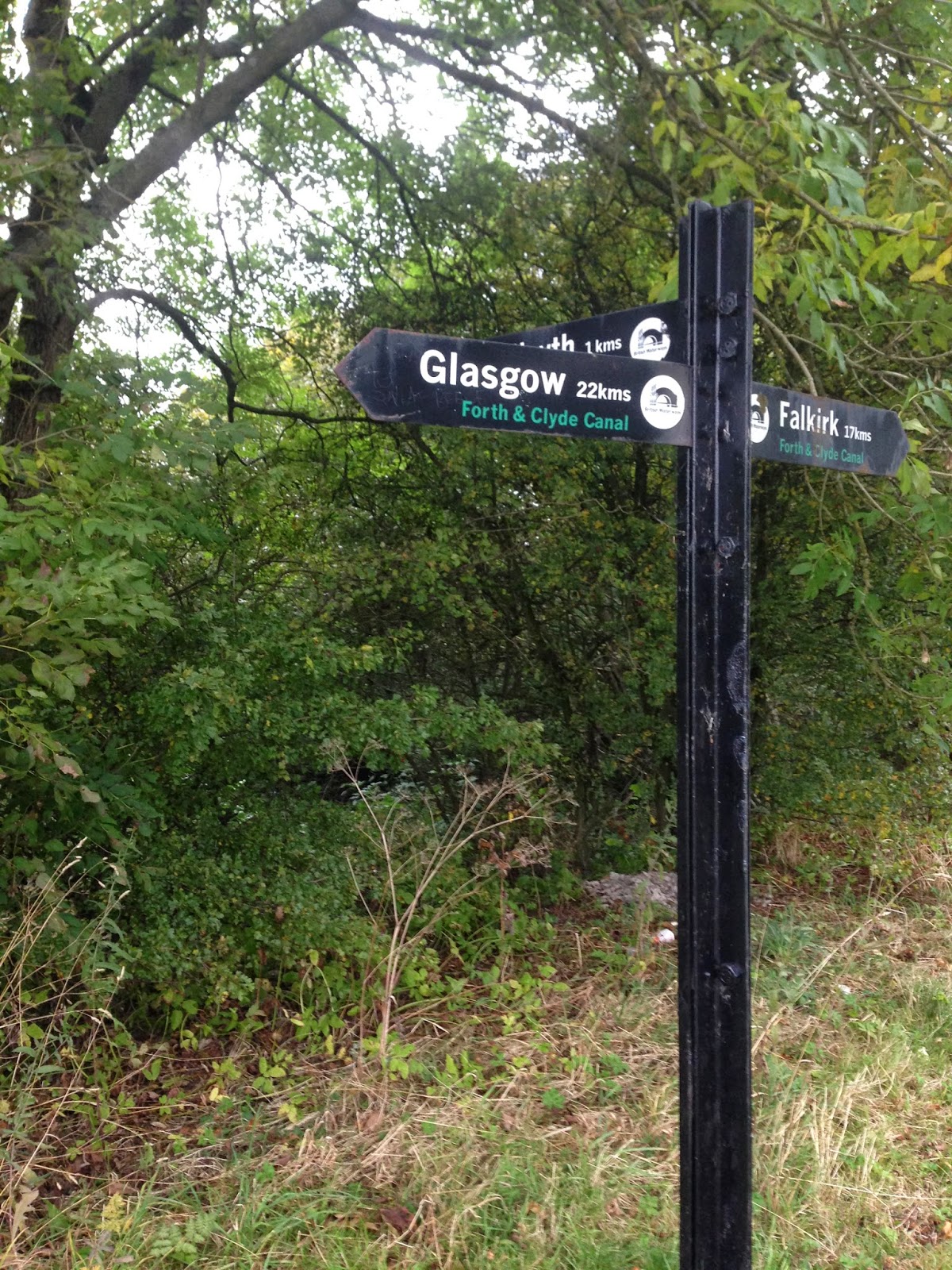 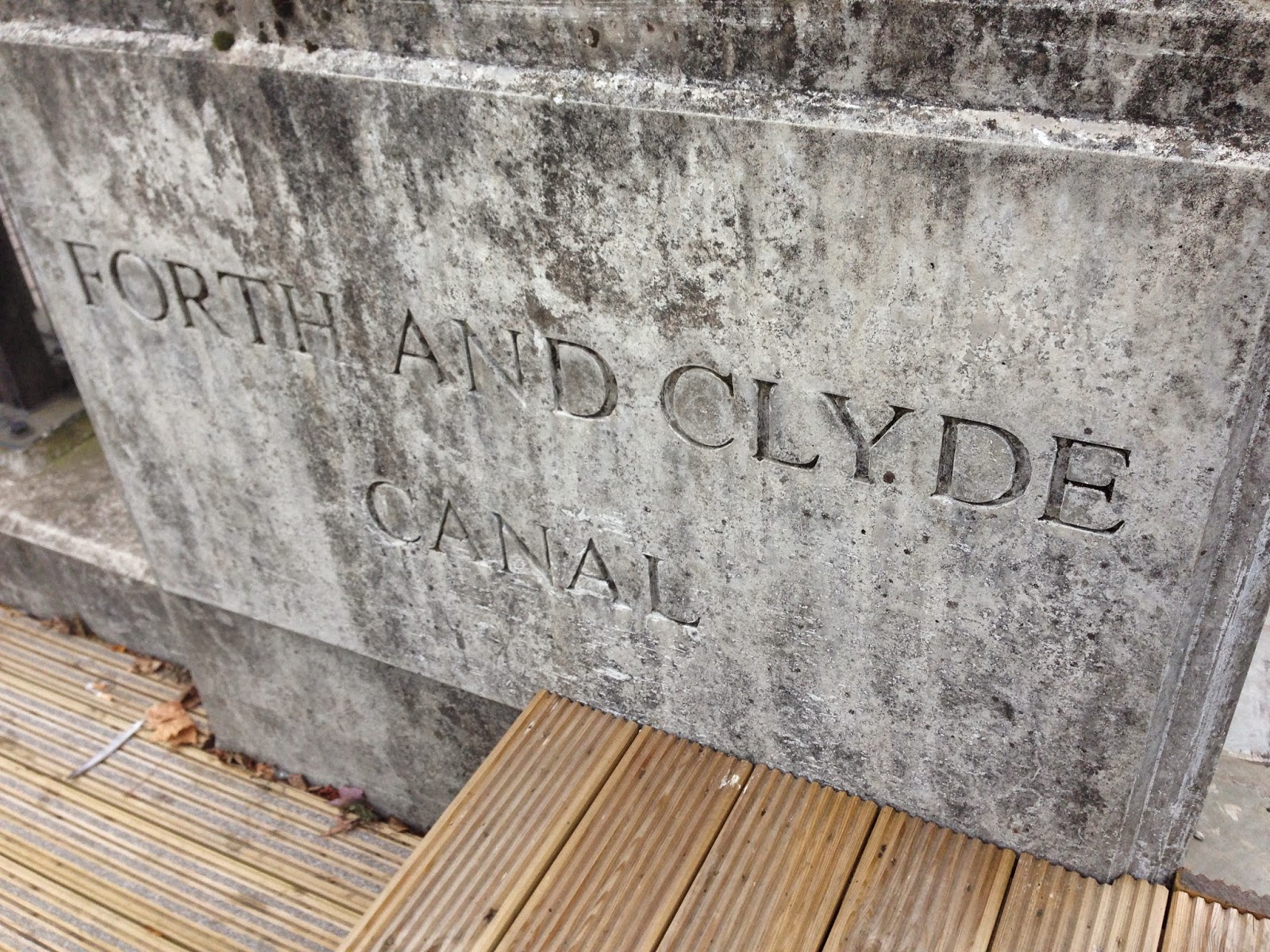 it is really strange how relative weight can be. and time as well. and distance; therefore also their connection, pace. RELATIVE - that's probably the word I was thinking about most often during these three days. in my experience that happens quite often by the way, while making one after the other step for hours, your thoughts kind of work in a similar way. for big parts of my journey I kept repeating stupid phrases and thoughts, not because I wanted to, it just happened. for example, on saturday around lunch time I had 7 words in my head which I annoyingly couldn't get rid of, in my mind I repeated them for ages, every step one word. "MON-DAY, TUES-DAY, WEDNES-DAY, THURS-DAY, FRI-DAY, SATUR-DAY, SUN-DAY", etc etc etc.
also I thought a lot about relativeness as I already said. near edinburgh I saw an airport in the distance. FLYING. a normal plane can maybe do 800km/h. which means it takes it 4.5 seconds per kilometre. RIDING A TRAIN. maybe 60-150km/h. train ride between glasgow & edinburgh takes about 50 minutes. DRIVING. on motorway around 100-130km/h - 28-36s/km. CYCLING. my trip from crowthorne to basingstoke and back took about 3 hours, was around 55km - that's about the half of my way from edinburgh to glasgow. many comparisons, I know, but that's exactely what I did during my trip. watching the trains, thinking about the cyclists, waiting for the next busy street.

anyway, it's already half past 12.. I'll keep it short now.
the most difficult part of my journey were definitely the last two hours. I was already in glasgow, but still there were around 12km to do, and these were terrible. my mood had reached its low, my feet and shoulders hurt as hell and I was daydreaming of my bed at the hostel. however, somehow I managed to do it, though I failed to keep up with an old ladie's pace during the last 500m. the only emotion I felt when I reached the end of the canal (which was on sunday 28 september at 13:55) was relief, nothing else. I stayed there for about 45minutes, my brain was completely empty and so felt my body, no energy. the hostel was really nice and seemed like heaven to me. after an amazing shower I wanted to go to bed but fortunately I did not since I met to guys from bask country who I then spent my 1.5 days in glasgow with.

all in all, I really can say it was a great experience, although it was also quite hard. I don't want to think about the next adventure yet, but I'm sure there will be one.

by the way, the last few weeks were so busy that I won't write about them apart from this entry. they'll forever stay as my secret^^